Some background about  Arbor Day . The Arbor Day Foundation is a truly American holiday. It was the idea of J. Sterling Morton, a Nebraska newspaper editor. In 1872 he declared April 10th Nebraska Arbor Day and had one million trees planted in his state. The day became official in 1907 when President Theodore Roosevelt issued an Arbor Day proclamation to the school children of the United States about the importance of trees in our world. There are no Hallmark cards for Arbor Day but the Foundation is still going strong planting trees all over the world. Our garden club celebrates by planting a tree in the park to commemorate those in our community who have died in the past year. This year the ceremony has been postponed.

Back to my five Serviceberry trees (Amelanchier Canadensis). I’ve potted up one, waiting until I find a place for it in my garden. The other four I’ve planted in the woods across the street so, if they grow, I’ll see them from my porch.

Why are they called serviceberry? You have to look back to the beginning of our country when roads were unpaved. People didn’t get out much in the winter. (A bit like this past winter.) In rural areas acknowledgement of births, deaths and marriages generally had to wait until spring. That’s when the preacher made his rounds to officiate at funerals, baptisms and weddings. When this tree bloomed the ground could be dug for burials and all the ‘services’ could be performed.

Amelanchier is also called Shadbush. Guess what, it blooms when the shad runs in the rivers. 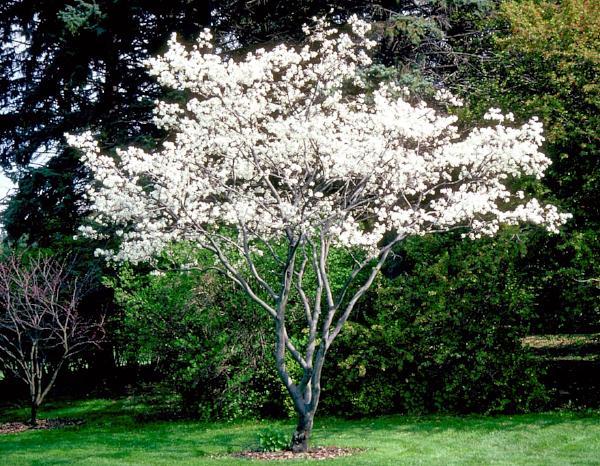 It’s a small tree, (15 to 25 feet) native to North America that has multi-season interest. Fragrant white blossoms in May are followed by edible dark purple berries and pretty fall foliage. Some say the berries are tastier than blueberries and the birds love them. I’m not looking for a serviceberry pie this summer but maybe in another summer or two if the birds are not too gluttonous.