Phragmites?  I thought it was a skin disease. But it’s not; it’s simply the common reed that grows all over our wetlands. When I gardened inland I’d never heard of these twelve- foot- tall invasive grasses called phragmites australis. They migrated here years ago in the ballast of ships.  Can you believe they’ve now reached the shores of Lake Michigan and Utah’s Great Salt Lake? They  have a strong root-hold in my area of the Eastern Shore as well. As I look across the street to a pond they have encircled, they look harmless and kind of pretty waving in the breeze with their feathery plumes.

There are native ‘phrags’ called phragmites americanus, but they’re not invasive and are fully integrated into our ecosystem, meaning they are willing to share the turf with other natives. It gives me a good feeling that it’s the Americans this time that are known for their civility. Phragmites australis, on the other hand, put a choke hold on our wetlands, aggressively bumping off the natives.

My concern is these guys are pushing up all around my house. 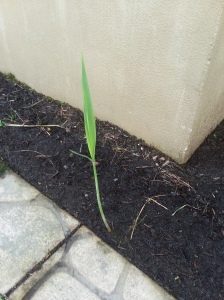 Here’s a lonely ‘phrag’ creeping out from under the walkway. 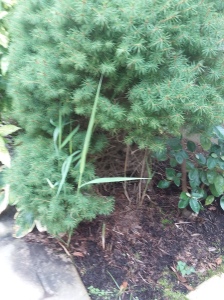 Here’s a group that would smother the Dwarf Alberta Spruce if given half a chance.

Gardening on the Eastern Shore is more complicated than I thought.

I whacked the ‘phrags’ to the ground last summer before I found out I was merely waking up their instinct for battle.  I’ve done some research and apparently, they require a more deadly approach – herbicides at the right time of year. I wondered about smothering them with garden landscape fabric. Then I checked The Big Blog of Gardening and found out landscape fabric comes with another set of problems. Namely, one ‘phrag’ spear or many can easily penetrate the fabric and I’d be left with a mess of shredded black plastic shot through with ‘phrags.’

The reality is I have a small area that I can control by cutting back. If I am judicious about it, the rhizomes will gradually weaken and finally stop sending up shoots. Now that may take a few years but it’s doable.

The good thing is I’m now aware of an ongoing control problem that the Eastern shore must deal with. We want a diverse wetland ecosystem and ‘phrags’ drive everything else out. The rhizomes can travel up to a half mile in search of a new colony site. They are  partial to disturbed soil where for instance someone has put in a new dock. In one season ‘phrags’ could create a tall barrier. The homeowner would never see the water from his dock. There’s a clue in the word’s Greek root. Phragma means fence.

But further research led to an interesting discovery. Could phragmites australis protect wetlands from our rising seas? They store more nitrogen than the natives and they take up a lot more carbon, the bad guy in global warming. Was it Ralph Waldo Emerson who said,  “What is a weed? A plant whose virtues have yet to be discovered.”

The existence of ‘phrags’ in my neighborhood reminds me of the importance of gardening’s three P’s – persistance, patience and perspiration. I’ll try to cultivate the first two and have to be willing to expend a good bit of the last.