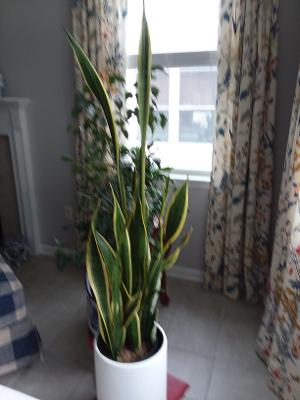 I used to think diehard and tough were the best things you could say about Sansevieria, aka snake plant or mother-in-law tongue. Years ago snake plant (along with philodendron) was the plant most people had in their homes and offices. They were there because they’re almost impossible to kill, especially if no attention is paid. That’s generally what happened. They got dusty, shoved in corners, rarely watered. But they thrived on neglect. They were the quintessential ugly plant. I never thought I would buy a Sansevieria because I like pretty plants. But I now have two: the Sansevieria trifasciata (with a yellow border) and Sansevieria zeylanica (without a yellow border.)  Now they’ve grown on me. They’re attractive in an architectural way and contrast the leafy, spill-over plants with a tall, noble grace. Maybe one reason they’ve gained favor is they came out among the top air-purifying plants in a famous NASA study. And, they do it at night; collect carbon dioxide and release oxygen. They deserve a special place in the bedroom.

My daughter said she would like some houseplants and I thought I’ll share some with her for free. After we divided an aloe vera and potted that up, I thought why not take part of a snake plant. We unpotted the Sansevieria zaylanica and sliced off a section with my trusty bread knife. She went home with her new plant and called a few weeks later with the news. “There’s a flower stalk on that snake plant.” 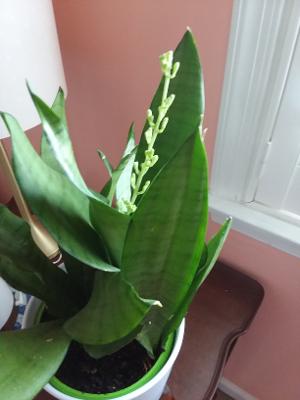 “What,” I said and took a closer look at mine. Darned if I didn’t also have a flower stalk. I went to the internet. Turns out, snake plants rarely flower, but mild stress may cause it to happen. A bread knife slice must qualify as mild stress. I can go with that.

But Sansevieria flowers and fragrance, really? Yes, my Sansevieria zeylanica has sported lily-like flowers and lovely nighttime fragrance.  The plants are native to Madagascar and Africa, so there must be a moth somewhere in Madagascar or Africa who goes about at night searching for the sweet fragrance, because the scent isn’t there in the daytime and the flowers are closed up. How complex are these plants, knowing just what to do and when to do it.

Apparently the plant was found in his garden and so named for him. It has since been moved to the Dracaena genus. I prefer Sansevieria since the prince was a colorful man: inventor, alchemist and scientist with lots of rumors about nefarious activities.

So because of my bread knife and the desire to share a free plant with my daughter we both got to see and smell the rare Sansevieria lily. We may never get that opportunity again.

4 thoughts on “My Sensitive Sansevieria”