The growing season is slowing down, although not coming to an end. There is always something going on in the garden; for the earth is always busy. This is the invisible season when the grateful garden gives forth a bounty of orange and green and other deep, lusty colors. 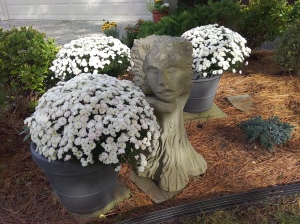 It’s when pilgrim stories are told in varying renditions. We now know that Thanksgiving Day was much more than a happy celebration. It was the beginning of great upheaval of 10,000 years of Native American life and the beginning of massive European migration, an unstoppable clash of cultures that altered the world. That’s our heritage.

I bring out my brother’s Thanksgiving carvings, a noble Indian brave and a man and woman pilgrim. I put the woman in the center because she holds a platter of corn, the garden harvest so essential to European survival.  They were literal babes in the woods.  Everything had to be grown and harvested or captured in the wild. The faces of all three are traced with apprehension and guarded speculation. No smiling selfies here. Too much was unknown.

What we know now is each culture brought ideas and each learned from the other, particularly things of the natural world. Corn was the grain that carried them through the early winters. This was way before our Fourth of July tender sweet corn. It was multicolored kernels that were pounded into meal meant to last through the long cold months.

Corn was part of the “three sisters” vegetables; corn, beans and squash. The Old Farmer’s Almanac includes an article on How to Plant a Three Sister’s Garden.

Indian legend casts corn as the older sister, its tall stalk there to support the other two. The bean plant is the giving sister, pulling nitrogen from the air into the soil for all plants to share and crawling up the corn to hold all together. The third sister, squash, shades and protects the plants with large leaves against weeds and pesky intruders. We carry on the “three sisters” tradition: we make cornbread and bean casseroles and pumpkin pie. We decorate with the ever increasing varieties of pumpkins and squashes the growers produce. 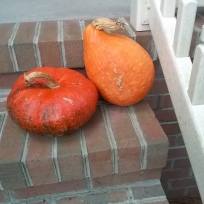 Thanksgiving gives us pause to enjoy the sanctuary and solitude of the quiet garden at the end of the growing season and think of what we appreciate: the work of Master Gardeners, the sharing of our gardener colleagues, the mistakes we have hopefully learned from and, most of all, the bounty of the earth.

2 thoughts on “The Grateful Garden”