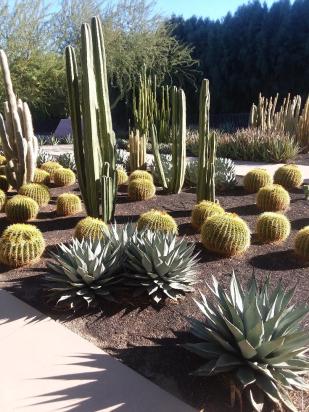 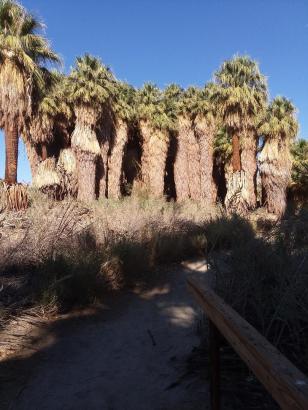 The desert of Palm Springs, California is about as far as you can get geographically and ecologically on this continent from the watery world of the Eastern Shore. It is pure desert and dryness. Still, it’s part of our country and the versa to our vice.

We visited two gardens there, one a stylized, man-made, plant-sculpture garden and one created by the breathtaking long ago forces of nature. Both were impressive in desert beauty. 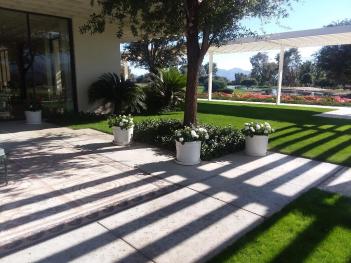 Sunnylands Center and Gardens was the estate of Walter and Leonore Annenberg, now a retreat center for the study of media, politics and society.  It’s called an “art garden.”  The video explaining the thought behind its creation is worth looking at. It shows a peaceful, lush desert garden with plants carefully selected for color and structure. There are 10 acres of native, drought-tolerant plantings arranged in single- species gardens to compliment the Annenberg collection of Impressionist and post-Impressionist paintings. Art reproductions are seen throughout the house, as the original works now reside at the Metropolitan Museum of Art in New York City. 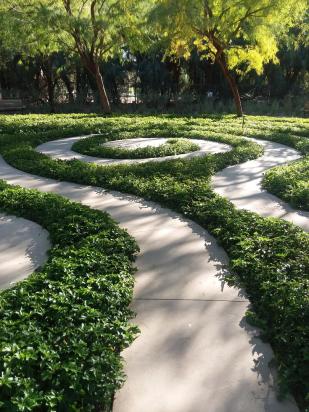 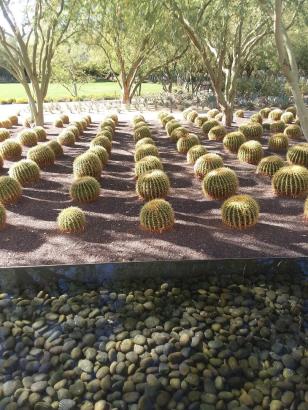 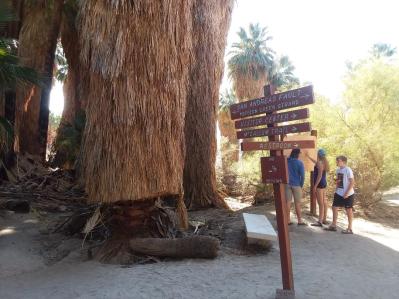 The Coachella Valley Preserve was our other garden visit. This 20,000 acre oasis sits smack on top of the San Andreas Fault.  Sulphur-laced water bubbles up through the fault line and fills the pools with milky water. California Fan Palms grow around that water and create the quiet magic of the preserve. Fan Palms are the only palms native to the south-western United States. They never lose their dried palm fronds, giving them another name – petticoat palms. Their long grass skirts form a complete ecological system, housing snakes and rodents downstairs, insects, birds and bats on the upper levels. Coachella docents refer to these palms as “critter condos.”

The fringe-toed lizard lives in the preserve and nowhere else. We never got a look at him, but we did meet other creatures on the trails. On one sun bleached path we met up with an insect about one inch long. For his size he had very long legs. So long that he could toil across our path with a small stick efficiently tucked under his legs. When he dropped it, he carefully circled around , scooped it up and marched on his way. We were on holiday, he was at work.

Coachella must have been a sacred spot for the native people of the desert. The palms bring shade to an otherwise parched landscape. Walking among them, even with other hikers nearby, felt like we’d stumbled into a place of worship. 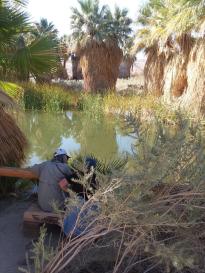 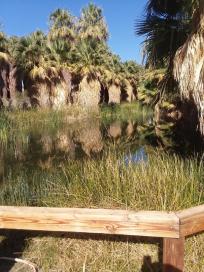 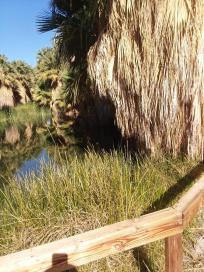 Coachella and Sunnylands bear the imprint of man and nature. Coachella evolved over centuries, remaining in existence because people saw the value in preserving it. Someday the fault may remake it in one cataclysmic moment. Sunnylands evolved in one couple’s lifetime into a 10 acre painting of plants. Both give one pause as to the myriad ways to approach nature and gardening. Both could be created on our side of the continent with an appreciation of what nature has given us.